"I would say that music is the easiest means in which to express, but since words are my talent, I must try to express clumsily in words what the pure music would have done better."

-William Faulkner
Posted by Faulkner Tapes at 21:20 No comments: 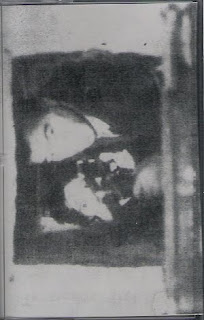 This may be the best dang rock 'n roll record of the year. I know, I know, I am "biased" cause I'm "putting this out" but, um, I felt the same way about Night of Pleasure, Columbus OH's most handsome and musically inclined sons, before I put this out so does that really make me biased? Bias is just an opinion, right? And we all know what they say about opinions. I mean the only damn reason I'm putting this out is because Night of Pleasure kicks some serious motherfucking ass and I wanted to hear more of their songs. And I figured everyone else should probably hear more of their songs too.
So after amazing singles on Columbus Discount (including their collabs with Aaron Troyer of Day Creeper as Outer Spacist,) here it is Night of Pleasure their debut full-length as far as I am aware. 10 amazing songs in 22 amazing minutes. 10 more songs to add to their eventual greatest hits album, which will include their entire discography of course.
My co-conspirator in Ftapes, Colleen's favorite song on here is "No Vibrations" which is about as fine a choice as you can make, but "Your Back Pages" might be a little closer to my heart so here are both for your sampling (night of) pleasure:
No Vibrations:
Your Back Pages:
Tape comes with homemade xeroxography by the band.

Night of Pleasure was played on Free Form Freakout along with lots of other great tunes; David is definitely the king of experimental podcasting. Check it out!

Posted by Faulkner Tapes at 08:33 No comments: 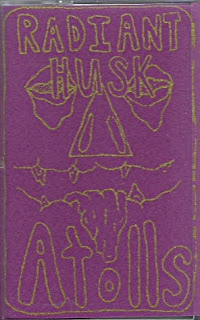 Bay Area dude and super nice guy, Matt Erickson keeps much too low of a profile for the caliber of work he produces. Whether it's with his guitar/sax duo Sudden Oak, the always brilliant and fetching tapes on his Bezoar Formations label, curating a right gentlemanly (and darn good) benefit compilation LP or, my personal favorite, Matt's reeds, keys and whatever else solo project Radiant Husk. Having put out stellar Rad Husk releases on his Bezoar imprint and with a 12inch on Mr. Ducktails's label looming in the future, here is Atolls to either hold you over or get your ass acquainted.

Waves of reeds glisten and sparkle in the dullest shade of silver producing the sound uniquely specific to Mr. Erickson's work for an otherworldly and unexpectedly grooving audio cassette experience.

Peep the sample below for proof:


The tape features artwork by Jeff Johnson, screenprinted my Keith Whiteman. The color scheme was chosen in honor of my 2010 Holiday Bowl-winning Washington Huskies.

Check out a review of Atolls on Anti-Gravity Bunny

Posted by Faulkner Tapes at 08:32 No comments: 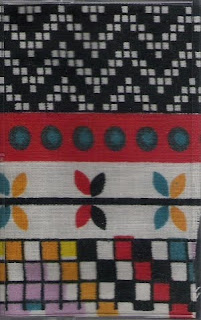 I approached Arklight about doing a “world music” tape a long while ago and The Callow Summit is the behemoth they delivered. Whilst National Geographic-ists think world music is all quaint tribal dances, South American pan-flute music (which I am personally so down with) and whatever other NPR-reported trends are happening in this day and age—Arklight deliver straight-up post-colonial grime. Everything you could want is here (and probably some you don’t.) Curiously breezy grooves, weird post-modern yet old timey tunes, the hardest-mothafuckin’-core gangsta rap-sampling beat annihilation, Umm Kalthoum-meets-early Yellow Swans jams (seriously.) It’s an ethnomusicological nightmare!

Now that you’re sick of last Summer's jams, Autumn proved to be a disappointment and the winter was cold as hell and the spring ain't much better, shove this in the nearest ghettoblaster and dance, weep or puzzle your way into the new Summer’s darkness.
Pay particular attention to the 1-2 fucking knockout of "Bolshinstvo Outgrowths" and "Manifestations of Doubt" on Side A. Mellow grooves turn to brutal ones. For your sampling pleasure, below is a music video of said tracks directed by Danny Kolm.


The tapes come with hand-cut "j-cards" of pseudo-"World" fabric, painstakingly made using a highly sophisticated method consisting of binder clips, scissors and a Michael Bolton j-card. I guess the band liked them, so maybe you will too.

Mike Haley and the boys of the stellar Tabs Out podcast jammed some of The Callow Summit tape on Episode 7: check it out!

OUT OF STOCK
Posted by Faulkner Tapes at 08:28 No comments: 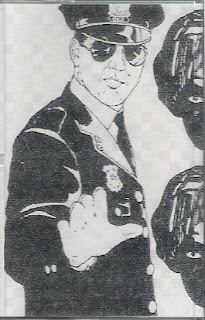 Posted by Faulkner Tapes at 08:27 No comments:

Description via Avant Archive:
"Drew Dahle, meet Electric Guitar. Electric Guitar, meet your abuser. Mr. Dahle, aka Rogue Cop, is badder than any wing-nut in a trench coat and fedora you've ever encountered. The brazenness with which Dahle handles his axe is insisted upon with every second of Act of Violence. This album is vindication for both the hard-headed purists and the die-hard experimentalists. No frills required, no rule book exists. Act of Violence is difficult to discuss simply because it has very few points of reference. It is simply the sound of a guitar being mangled. Though if you listen closely and perhaps long enough, you can certainly begin to create your own frame of reference. Rogue Cop has his own way of doing things, and if you give him a chance, you'll start to come around to the idea that his way could be your way too."

"june 2011 release ; ... fine tape of blown-out / up noise-guitar shrapnelry from drew dahle ...kind of reminds me of a “slo-mo” take on brian ruryk’s whole ethos (sans the triple discrete mono overlay) ; the fidelity is monster-hot, strings are depressed into pickups, bent off edge of neck, run ragged via scrap metal & assorted non-traditional technique(s) ...frankly, it’s kinda great to hear this particular approach right now amidst the 11th return of “guitar + ebow + loop-pedal = master concept” revisitation ; i’ll take ten tapes of this over that any week ..."

Description via Stunned:
"This debut cassette from Seattle’s Rogue Cop rips it up from a hundred different directions with electric guitar being the sole cause of all the excitement. Fusing semi-calculated loops of red hot plink-plonk with agitated riffs dipped in booze, an entirely original stance to the six-string is fleshed out in under an hour. It may blindside you as it did us — totally unprepared for its wild methods and funny way of getting us to root for yet another cop gone rogue. Limited edition of 111 pro-dubbed & imprinted c58 tapes w/ double-sided jcard and insert."

Posted by Faulkner Tapes at 01:26 No comments: